When the pandemic struck, Yapp gave LSF the confidence to rapidly pivot from a live, 3-day festival into a month of daily livestream and on-demand events 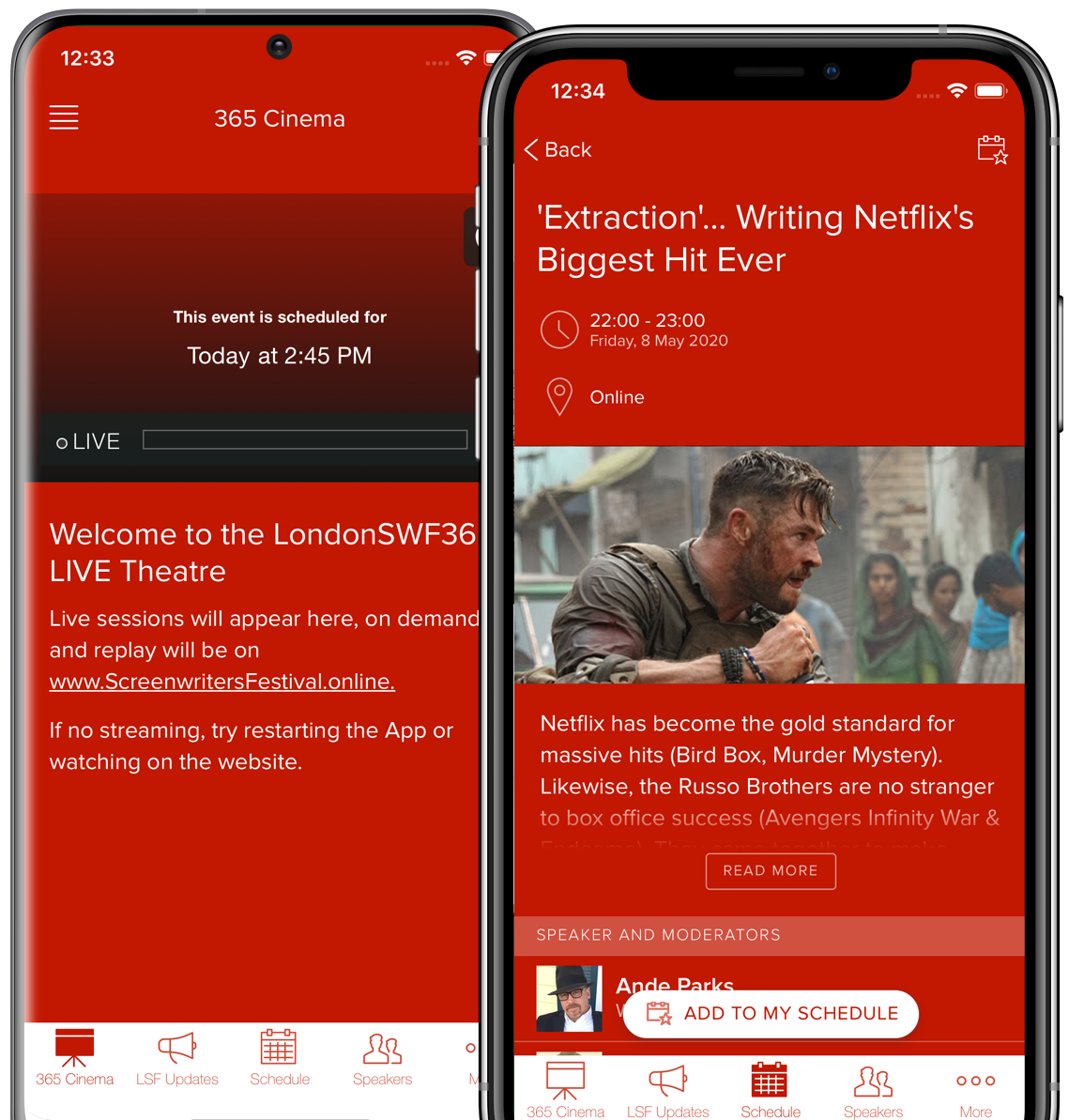 "We needed something we could put in people’s hands and say, Look at your phone for the answers. Plus for my team to be able to program it.”

The London Screenwriters’ Festival is the premiere event for professional screenwriters. The three-day event annually attracts more than 150 industry expert speakers (from the biggest names to emerging talent), while catering to more than 800 attendees, and offering up more than 100 sessions.

Attendees, called delegates by the organizers, participate in the festival in several ways: in person at Regent’s University in London, and online through a private Facebook group, Yapp, and/or the LSF website. The attendees rely on printed or digital schedules, which must be updated regularly due to schedule changes.

“Communicating with 1,000 delegates became really quite challenging,” said Chris, the festival creative director. “That was part of the main reason we wanted an app, we needed something we could put in people’s hands and say, Look at your phone for the answers. Plus for my team to be able to program it.”

2020 was going to be a banner year for the London Screenwriters’ Festival. It was the 10th festival and 10th anniversary and in the weeks leading up to the April 17-20 event at Regent’s University the small team of five had more than 150 speakers lined up for 100 sessions and more than 1,000 attendees expected. But as the novel coronavirus began spreading throughout the world, the organizers faced an existential crisis. Chances were they wouldn't be able to deliver the festival and they couldn’t refund anyone for the £348 (about US $450) tickets, having already spent the funds. “I needed everyone to agree not to need a refund,” said Chris. Already-purchased tickets were transferred to the next live festival, hopefully in 2021.

On March 11, the LSF announced the cancellation of the 2020 festival but then declared: We’ll give you a virtual festival of daily events from May 8 to June 7, delivered directly to your home, on any device, and, Chris added, “it will be mind-blowing.” For added incentive, tickets would be £60 and also include weekly events for 48 more weeks, when the LSF team would stream archival sessions from the vault of 9 years of past festivals. They called it LondonSWF365.

Before choosing Yapp in 2015, the London Screenwriters’ Festival had commissioned a custom app in 2011 that Chris called “a bit rubbish.” The LSF had been using Yapp for its annual festivals for five years, with gradually increasing adoption.

Affordable, agile app that could handle add-ons for livestreaming, streaming, podcasts, booking and ticketing and was elegant, clean and easy to use. Most important, the team wanted an app whose customer service would be responsive and partner with them on this ambitious, unprecedented effort.

Favorite feature: Yapp customer service, through chat, was responsive and a true partner in problem solving. “I immediately knew I wasn’t working with a wall,” said Chris.

“I know I’m speaking to a person who cares and is interested in fixing my problem instead of giving me a vanilla product. It’s in the DNA of everyone there.”

(He and the LSF team “speak” to Yapp team members through chat and email.) “I personally like to be able to ask questions and get answers from an expert instead of from an intern who gives me a line, or worse a bot.”

In one week, the London Screenwriters’ Festival team of five went from a physical company staging a live event to an 11-member digital one that would carry off a month-long lineup of daily events. The festival consisted of Facebook Live seminars, with chat, and “Zoom rooms” where the attendees and the speakers could gather for intimate discussion, as well as screenings and scripts, all on demand. The schedule was on Yapp, with easy links to all of the digital venues.

"Incredibly easy to navigate. The app is brilliant. Communication has been first class. Well done to everyone involved." — a London SWF365 attendee

Moving the festival online had many positive effects. People who had never before been able to attend, because they had young children or are disabled or care for family members at home, couldn’t travel that far, couldn’t afford the hotel and dining out in London, or other personal reasons, signed up. Compared to the previous year, festival attendance rose 60%; the gender breakdown changed from 60/40 female/male to 80% female; the adoption rate of the Yapp app increased from 20% to 66%.

Now the team has pivoted to a schedule of twice-weekly live events to fulfill the 2020 festival's "365" promise.

"Yapp seems to continue to work for us as a bulletproof solution," said Chris.

Not only does the team appreciate Yapp and its problem-solving features, but attendees raved about the Yapp app in post-conference feedback.

Give Yapp's self-service app creation platform a try. Create mobile apps for internal communications, training, events, and more. All the features, at a fraction of the cost
Thank you! Your submission has been received!
Oops! Something went wrong while submitting the form