Incredible savings by going mobile for all events.

North Carolina Pediatrics Society ditched paper event guidebooks and chose Yapp over other event apps for 4 events a year. This saved them 60% in print costs, 120 hours in manual labor and up to $7,500 compared to other solutions. 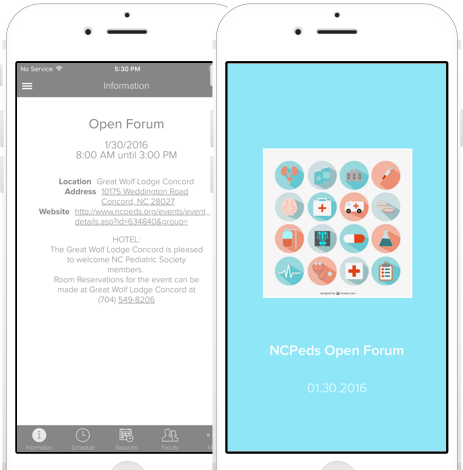 North Carolina Pediatrics Society (NCPeds) exists to advance and distinguish the role of pediatric medicine as a healthcare destination and support the ongoing success of our membership through education, advocacy, community awareness, benchmarking and promoting standards of excellence.

John and two other colleagues were spending at least one entire week prior to each event to build the paper guidebooks that were 20 to 40 pages long. That was as much as 120 hours spent in compiling the agendas and 20,000 sheets of paper for an event with 500 people. While paper is a renewable resource, the amount of money and time wasted on printing was too great to ignore. John wanted to make the guidebooks digital as well as mobile so attendees could easily access all the information they need at an event.

When John and his team started looking at mobile apps for NCPeds, they looked at three other solutions before they found Yapp. They compared the features they needed and the prices for each of the four providers. John found that the “competition was much more expensive, but not more essential.”

Every year at their events they see an increase in use of Yapp and decrease in request for hard copy meeting materials. They’re now down to printing minimal copies of only the schedule page. Their annual printed material development and product costs used to exceed  $12,000. Now with Yapp, the total cost is less than $5,000.

Compared to other app developers or paper, Yapp is simply the best option. “No matter where I am, if event apps are mentioned, I scream that they need to take a look at our app on Yapp!”

After deciding to make the switch from paper to mobile apps, reviewing several options for event app providers, John and his team at NCPeds found Yapp. When they compared the feature list and price, they determined Yapp was the best option on the market.

Give Yapp's self-service app creation platform a try. Create mobile apps for internal communications, training, events, and more. All the features, at a fraction of the cost
Thank you! Your submission has been received!
Oops! Something went wrong while submitting the form